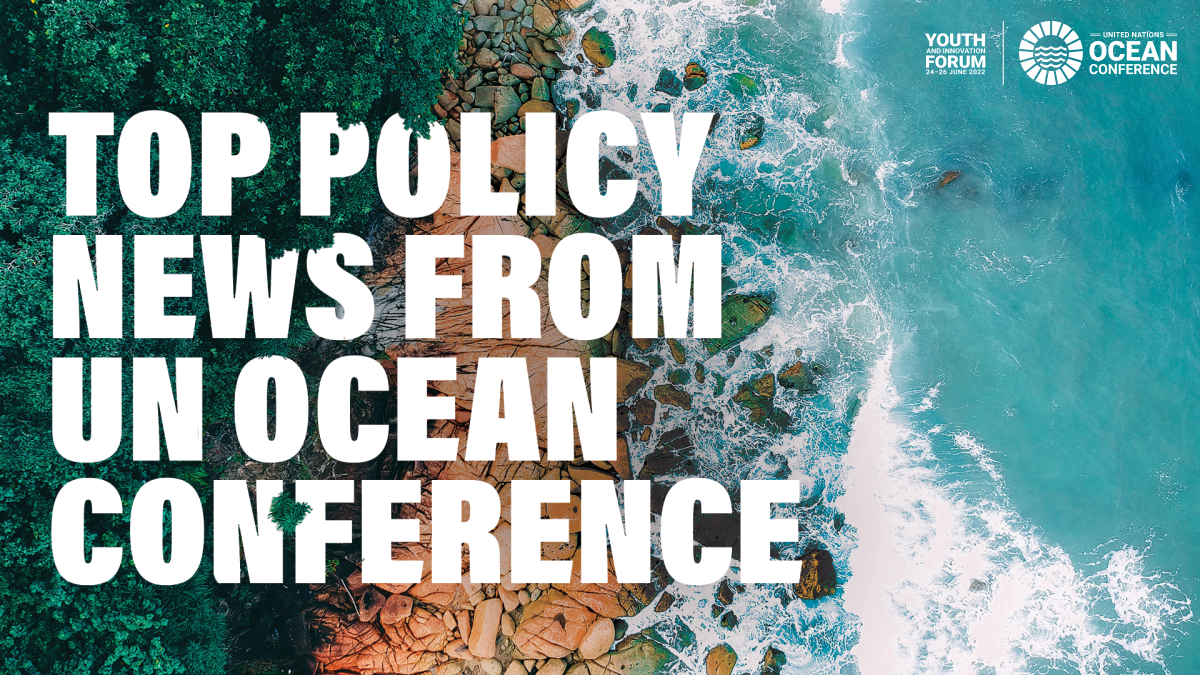 Deep-seabed mining, the blue economy, and marine protection were among the top policy discussions at the second United Nations Ocean Conference. The event was held in Lisbon, Portugal from June 27th-July 1st, and was co-hosted by the countries of Kenya and Portugal.

Government officials, policymakers, business leaders, scientists, and youth from all over the world came together to focus on achieving the urgent targets outlined in Sustainable Development Goal 14: Life Below Water. Members of the Sustainable Ocean Alliance team, including our Youth Policy Advisory Council, Regional Representatives, and staff, were in attendance. We are energized by the commitments made at the conference – but there is still much work to be done to restore the health of our ocean.

We've put together a list of the major wins from this year's conference. Keep reading to learn about how countries and organizations around the globe are taking action.

The Blue Economy
Kenya is currently developing an inclusive blue economy strategic plan; Sweden is actively working to reach its goal of 100% renewable energy by 2040 – including offshore wind energy; and Palau announced its plan to achieve 100% renewable energy by 2032. Indonesia announced a commitment to a sustainable blue economy through the protection of important marine ecosystems and management of fisheries. It also plans to issue a sovereign blue bond to fund these conservation and management activities.

The United States and Norway issued the Green Shipping Challenge to encourage governments, ports, maritime carriers, cargo owners, and others in the shipping chain to commit to concrete steps toward decarbonization by 2050. They plan on launching the official challenge at COP 27. In addition, U.S. Special Presidential Envoy for Climate John Kerry called on the International Maritime Organization to adopt a revised greenhouse gas strategy that includes the goals of zero emission no later than 2050, with an interim goal by 2030.

Deep-Seabed Mining
Several countries joined calls for a moratorium on deep-seabed mining, including Palau, Fiji, Samoa, Chile, Tuvalu, and the Solomon Islands. Peruvian Congressman Ed Malaga-Trillo announced that he will introduce the first Latin American bill to establish a deep-sea mining moratorium in Peru. President Emmanuel Macron of France also spoke out against deep-seabed mining at the conference, calling for the creation of a “legal framework to stop high seas mining and not to allow new activities that endanger ecosystems.”. In addition, Parliamentarians for Global Action, represented by MEP Marie Toussaint of France, also launched a Global Parliamentary Declaration Calling for a Moratorium on Deep Seabed Mining, with 212 signatories across 47 countries.

While Portuguese Prime Minister António Costa left the door open to deep-sea mining at the beginning of the conference, it appears Portugal's policy may have changed. After the conference, Portuguese Minister of the Economy and Sea António Costa Silva stated that deep-sea mining should be completely out of the question in the next decades, as we have only explored a fraction of the ocean and do not fully understand it.

Plastics
Kenya committed to developing a national action plan on sea-based marine plastic litter. India committed to a Coastal Clean Seas Campaign and will work toward a ban on single use plastics, beginning with plastic bags.

Marine Protected Areas
India and more than 100 other nations affirmed their commitments to protect at least 30% of the planet by 2030. Indonesia announced that they are keeping their commitment to expand marine protected areas (MPAs) to 32.5 million hectares by year 2030. Portugal committed to ensure that 100% of the marine area under Portuguese sovereignty will be assessed as being in "Good Environmental State" and to classify 30% of the national marine areas as MPAs by 2030.

Science & Innovation
Sweden will support enhanced scientific cooperation, pledging USD $400,000 to IOC UNESCO for the UN Decade of Ocean Science for Sustainable Development in support of work on SDG 14 target 3 in 2022. The Alliance of Small Island Developing States also launched the Declaration for the Enhancement of Marine Scientific Knowledge, Research Capacity and Transfer of Marine Technology to Small Island Developing States.

Investments
The Protecting Our Planet Challenge will invest at least USD 1 billion to support the creation, expansion and management of marine protected area and Indigenous and locally governed marine and coastal areas by 2030. The European Investment Bank will extend an additional €150 million across the Caribbean Region as part of the Clean Oceans Initiative to improve climate resilience, water management, and solid waste management.

The Global Environment Facility approved a $25 million grant towards Colombia’s marine protected areas. The Development Bank of Latin America announced a voluntary commitment of USD $1.2 billion to support projects to benefit the ocean in the region. Ocean Risk and Resilience Action Alliance also announced a multimillion-dollar global search for the next generation of projects to build resilience of coastal communities in the Global South.

Today’s oceans are a critically important...

Youth, More than Anyone Else, Need Governments to RISE UP for the Ocean!

2020 has been billed as the “Ocean Super Year” with numerous high-level events poised to address...

Youth are at the core of Sustainable Ocean Alliance’s mission, values, impact—and history.