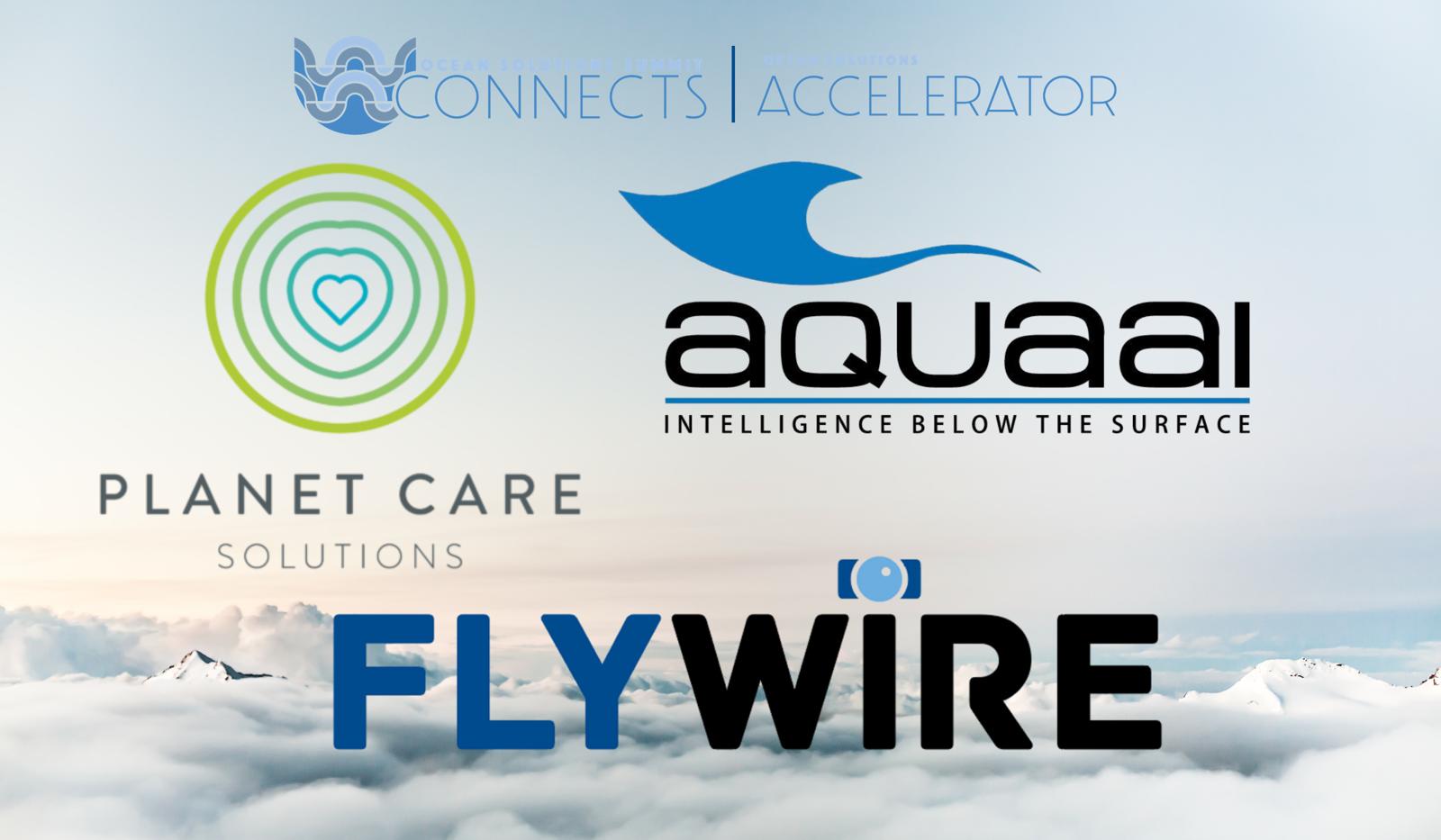 Each week in the lead-up to Demo Day 2020 we will feature members of the 2020 Accelerator Third Wave Cohort, illustrating how these companies got started and what they’re trying to change. 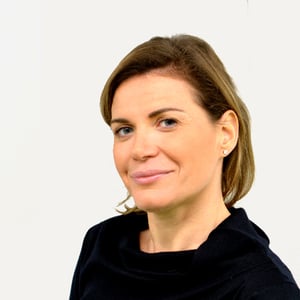 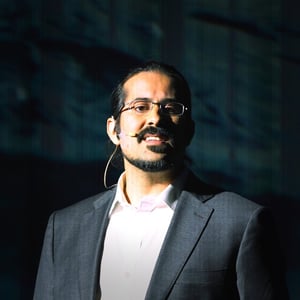 Jacob Isaac-Lowry and Sarah Alessi, co-founders, collect on-deck data from cameras on fishing vessels. This data is used to increase the profitability of the vessel while ensuring sustainable practices. 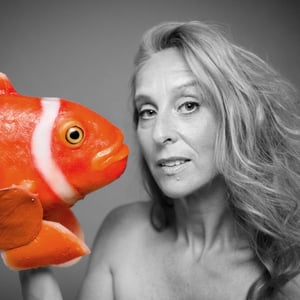 Liane Thompson, co-founder and CEO, works with her partner to produce and provide autonomous submersible platforms. The machines, designed to mimic fish, are able to monitor fisheries and report climatological data.

By 2050, plastic could outweigh fish in our oceans. That’s according to a recent report by the Ellen MacArthur Foundation. Much of this weight is contributed by microplastics: any bits of plastic measuring under five millimeters long. And about a third of those microplastics are flushed into the sea, every day, by our washing machines.

Plastic microfibers from our clothes are stripped out during the washing cycle, and with no factory-issued filter to stop them, they end up in our oceans. “Our cars have catalytic converters in them, not because they’re necessary, but because they protect the environment”, said CEO Mojca Zupan, “it’s crazy that washing machines don’t come with a similar thing.” 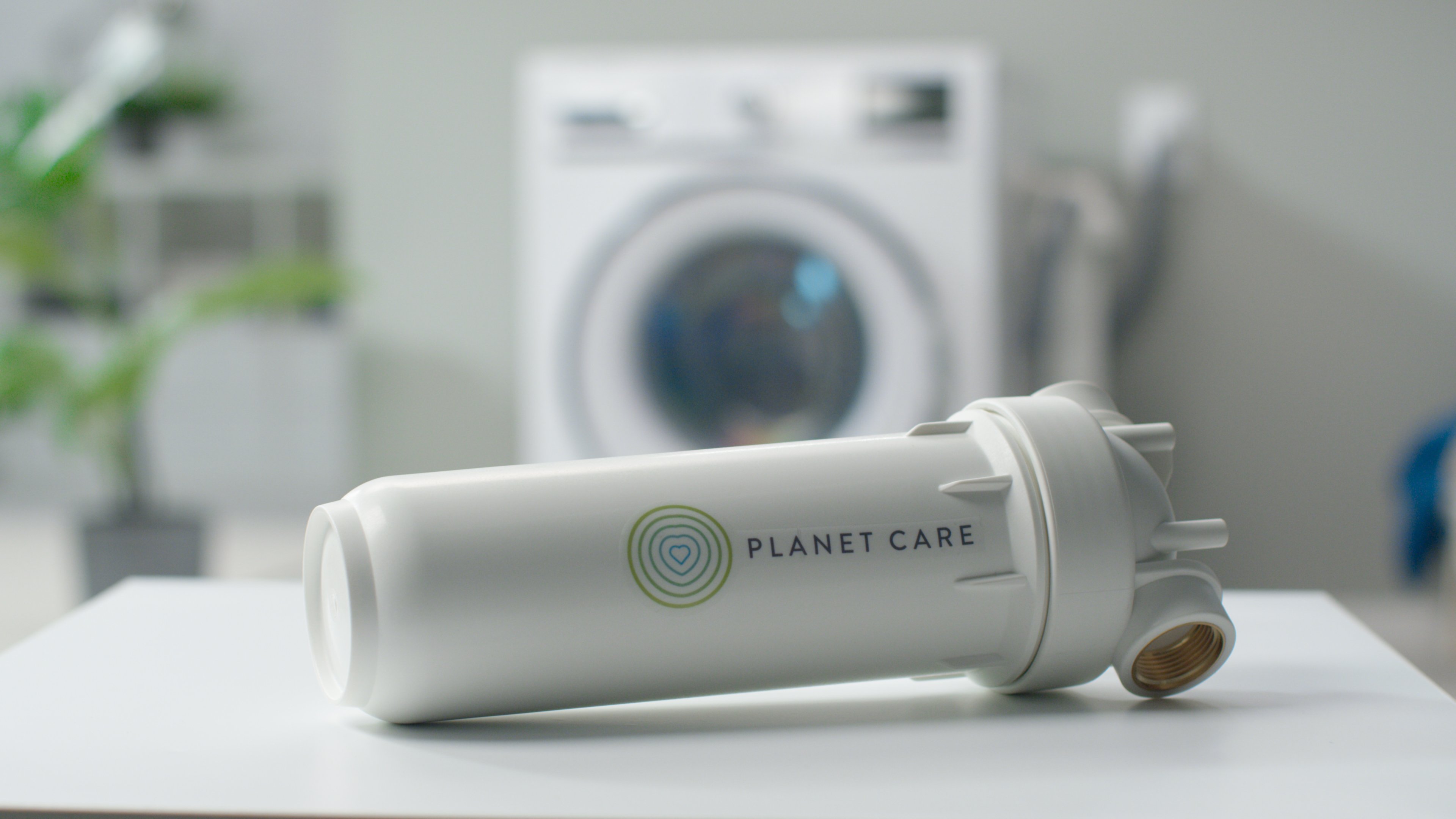 When she originally pitched her solution to washing machine manufacturers, Mojca was met with significant doubt. Sardonic executives told her that “people only want washing machines to wash their clothes. Period.” They asked “who wants a filter? Who needs that?” They told Mojca that they couldn’t see a market for such a product.

Planetcare’s filters now ship internationally. They are easily mountable to the side of any washing machine, and when a full box of them has been used up, they’re returned to Mojca’s team for refurbishing. The microplastics get stuck inside a polyester filter, and then removed, dried and stored.

Since one ton of plastics are required before they can be submitted for recycling, Mojca has gotten creative with what to do with the collected waste: “we’re in talks right now with one manufacturer to turn those fibers into sound-proof lining for your washing machine”, said Mojca, “I think that would make a nice, round story.”

It’s not easy keeping a sustainability-focussed business afloat in a profit-focused world, but Mojca believes that corporate change is necessary for us all to survive. “It’s hard for this rigid corporate structure to turn around, but that is why it’s so good that accelerators like [SOA] are alive”, said Mojca. She has her eyes set on developing new business models that would allow different principles to take precedent, like respecting the environment and respecting finite sources. 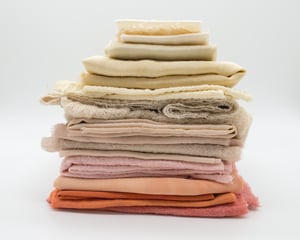 “It’s very frustrating when I show people this product and they say “oh, well, what can it do for me, what problem does this solve for me”, because I think we need to think the other way around”, suggested Mojca. Instead, she asked “how much is it worth, to me, to swim in a sea with no plastic? How much is it worth that my kids don’t have to drink that?”

In a globalized economy, data is everything. Flywire co-founders Sarah and Jacob have identified a data gap in the fishery industry’s knowledge of what’s going on at sea. And that gap - according to Jacob - can “put people out of business.”

A lone fisherman relies on data to predict where shoals may be found, or to gauge weather conditions before going to sea. The fishing industry as a whole relies on data to build legislation, set maximum catch limits, and build ecosystem models. But when you don’t have clear data, according to Jacob, people are forced to guess.

In the case of the lone fisherman, it may mean sailing into a storm. In the case of the entire industry, it means maximum catch limits may be wildly inaccurate. “It’s not that humans fishing is inherently unsustainable”, said Jacob, “we just don't have real information on exactly what is being caught where, when and how.” Without that data, it’s difficult for a fishery to ensure sustainability - even if they wanted to. 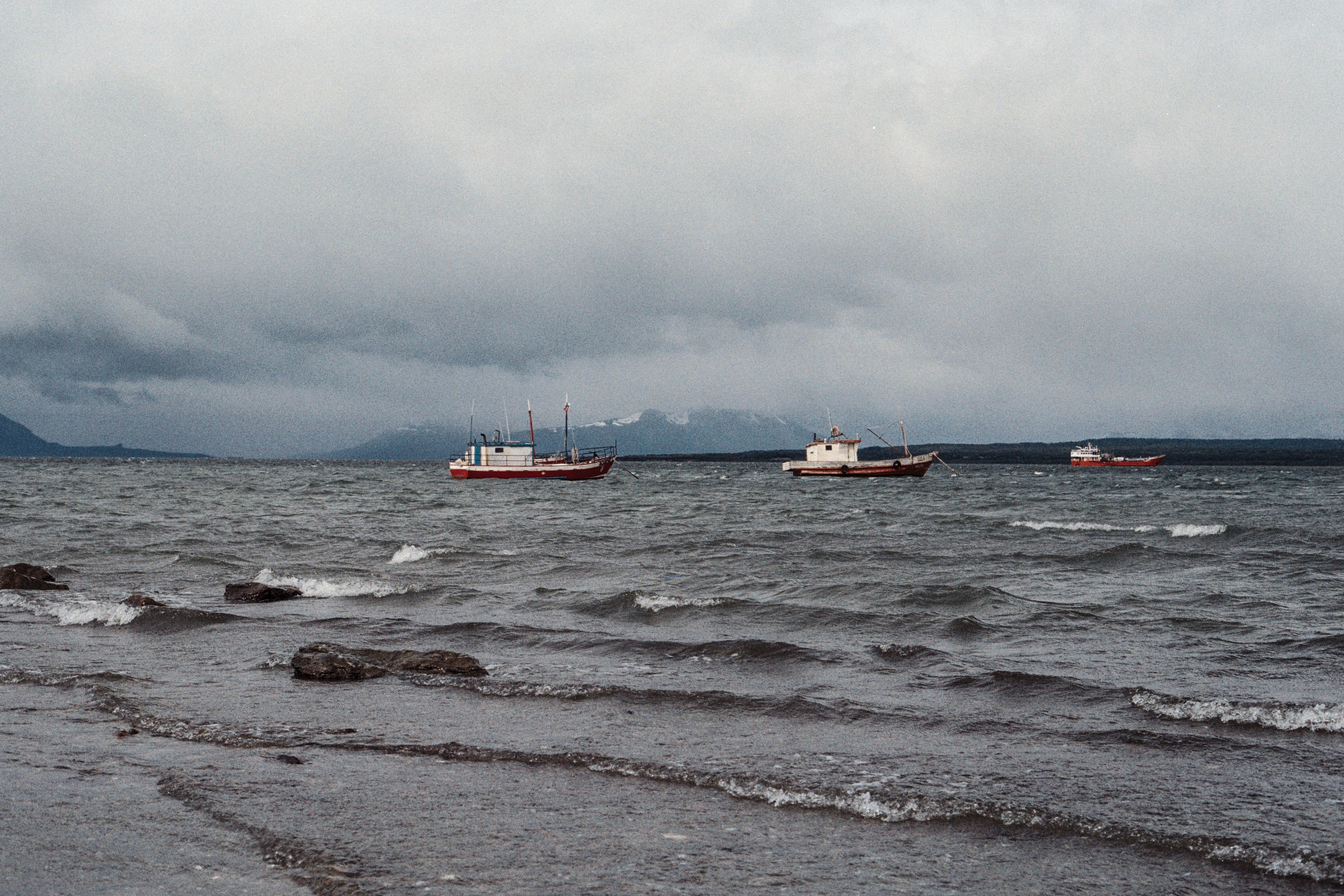 This is where Sarah and Jacob’s cameras come in. On-board surveillance is sometimes mandated by a government, which is not always received happily by industry vessels. Flywire offers an alternative to this “Big Brother” approach by using the cameras to generate data that works in favor of the vessel instead of against it.

With the “right couple tweaks”, Flywire figured out how to collect operational data in addition to sustainability data on fishing habits. According to Jacob, this data has “never been available to people in commercial seafood”, and can be used to optimize efficiency and profits.

To put it in industry terms: if Flywire’s cameras were a fishing net designed to catch increased profits, their by-catch is sustainability. 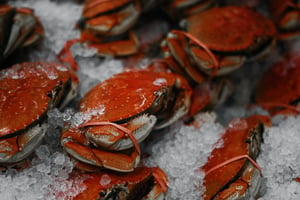 “There needs to be commerce”, said Sarah, “but we need to do it in a way that's environmentally, socially and economically sustainable.” Sarah cites the loss of species and coastal communities as evidence of the fact that our current methods “aren’t working.”

To improve those methods, Sarah said that “the change can’t come from a place of ‘we know better than you’, when “many of us have never even set foot on a fishing vessel.” Instead, she suggested that the industry as a whole ought to make the effort to “understand these fishing communities, and to work with them to support their livelihoods and support the food industry.”

After all, she pointed out, “we’ve all seen how essential the food industry is over the last 8 months.” In order to avoid running out of seafood on the shelves, the fishing industry has to have a clear picture of what they can afford to catch and what they can’t. If people want seafood, then we can’t run out of fish. Collecting adequate data is a major step towards ensuring that sustainability.

“Proximity to the source is what determines optimized data”, explained Liane Thompson, CEO and co-founder at Aquaai. So, if you’re trying to collect data on fish populations, the best way would be to swim alongside them: a difficult thing for a human to do.

To acquire this data, Aquaai has been building robotic fish for five or six years now. The animatronics are designed and fabricated by renowned roboticist Simeon Pieterkosky and are able to keep pace with aquaculture populations while remaining unobtrusive. Kitted out with three cameras and a myriad of sensors, the AUV’s give aquaculture farmers direct insight into their underwater operations.

“What we're doing is bringing the AUV to the commercial industry,” said Liane. Right now, Autonomous Underwater Vehicles (AUV’s) are prohibitively expensive, available only to oil and gas operations, defense forces, and select scientific programs. Aquaai is looking to expand the availability of AUV’s by starting in an industry that the founders were “already involved” with: aquaculture. 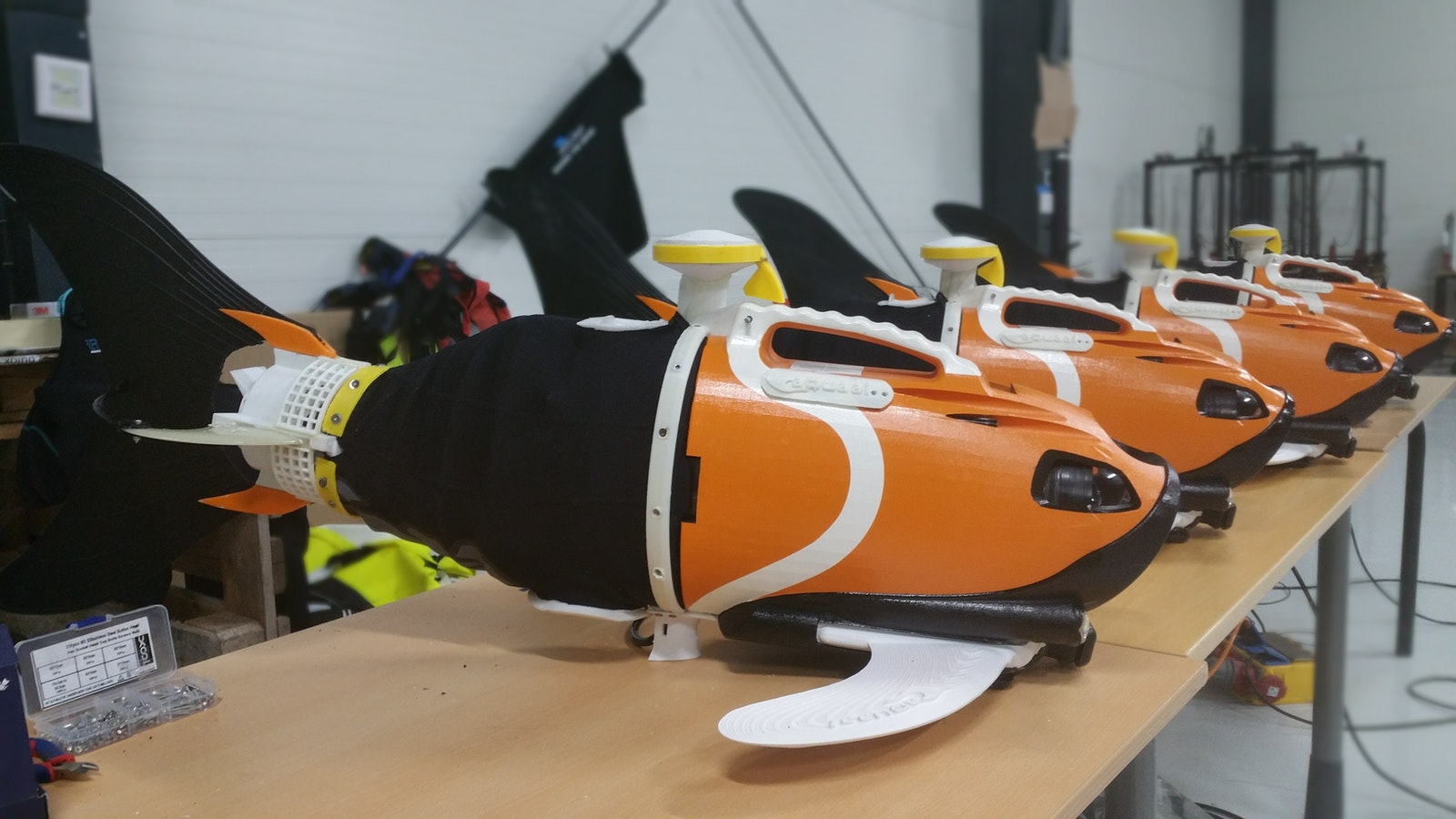 Liane described the standard sensor array for a modern aquaculture facility: a vertical, static setup that can’t follow it’s constituent of fish around a large tank. Without mobility, readings from this static array might not represent the conditions experienced by fish on the other side of the pond. With Aquaai’s platform, you “can just throw it in the water, it swims, and it gets the data”, said Liane, “it’s an all-in-one, end-to-end solution.”

What Aquaai has created is more than just an animatronic marvel. Liane described it as “a flexible, affordable system” that “immerses with the natural habitat and swims up close to the [data] source.” The added benefit, in addition to better data and operational flexibility, is a decrease in maintenance requirements. With a static array, wires and cameras have to be uninstalled to conduct repairs. Aquaai’s robotic fish can just be scooped out of the water.

Aquaai’s first robotic fish resembled a clownfish, a choice that was sure to get their name “on the map.” Since then, multiple platforms have emerged, each suited to their environment in the same way that a real fish’s morphology is suited to its ecological niche. The models can be deployed at sea or in a tank, and facilitate up-close study of marine life. 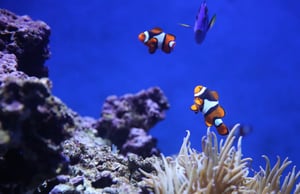 The animatronics still aren’t as well disguised as something out of Blade Runner, but they’re getting the job done; fish populations are less perturbed by the robots than they may be by a diver. And like all classic robot franchises, newer, sleeker models are constantly under development. Aquaai has been asked to produce a shark-based model for South African conservationists, and a grouper-based model for scientists at the Smithsonian Institution.

Efforts by the company were spurred on by a promise to “save the seas.” UAV’s offer a promising way to monitor sea creatures without disturbing them, but Liane remains skeptical that humans will always be around to poke about in the depths of our oceans. “Nature will survive”, said Liane, “the question is whether or not humans will be there to enjoy it.”

For now, the work done by Liane and Simeon enables humans to inconspicuously maneuver through our seas, and to strive for as sustainable a future as possible for the aquaculture industry.

Lessons from the 2020 Cohort

Nuggets of wisdom from the 2020 Accelerator Cohort