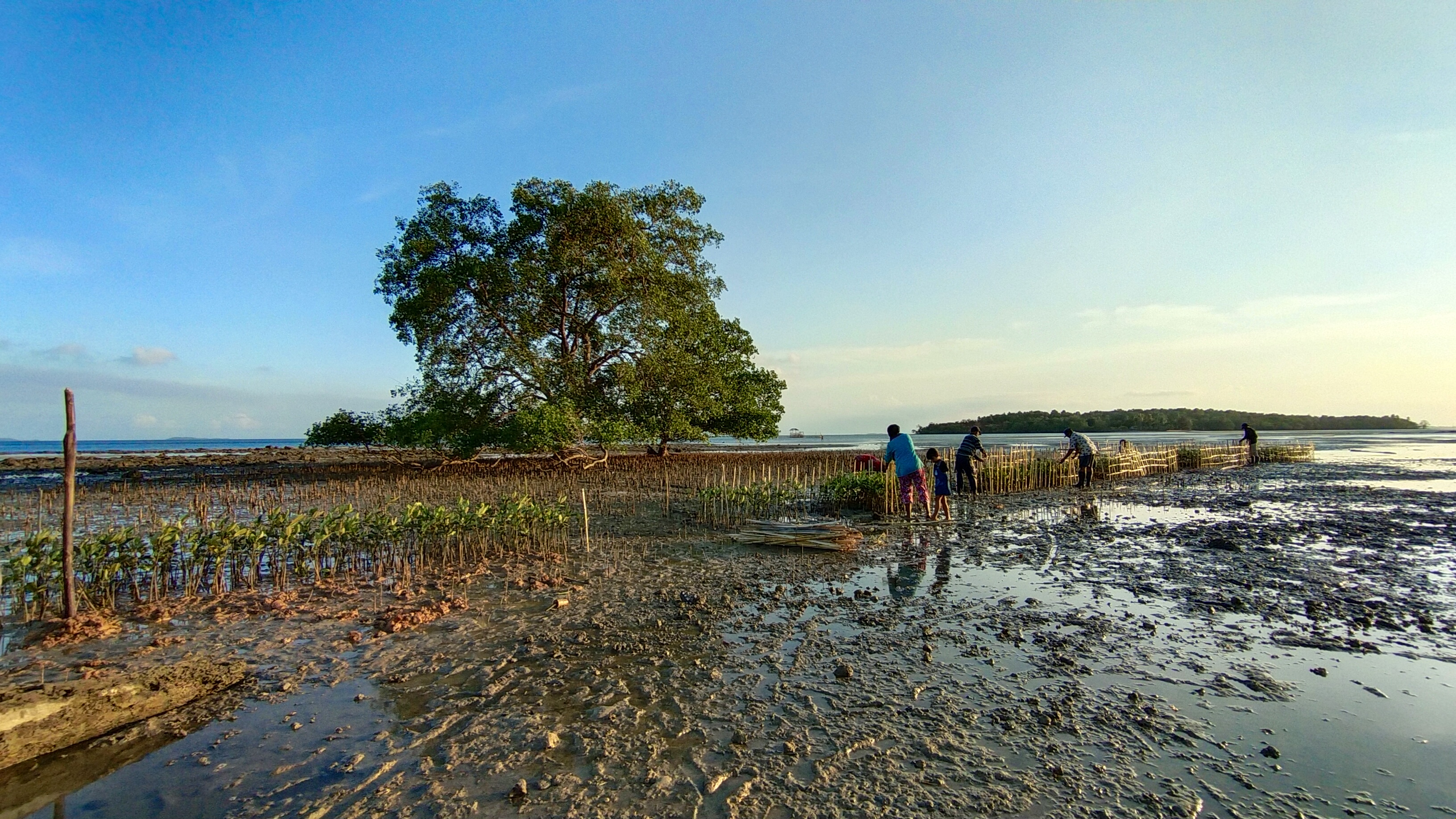 Mikoko Pamoja ("mangroves together" in Swahili) is one of the world's first community-based Blue Carbon mangrove projects, founded in 2010, and supported by SOA since 2020. In partnership with the Kenyan Marine Fisheries Research Institute, they train community members---many of whom are part of the Digo indigenous group--on mangrove planting and protection,  reimbursing them through the sale of carbon credits, which are facilitated by U.K. charity Association for Coastal Ecosystem Services (ACES) and certified by PlanVivo.  In recent years, erosion and increased agricultural runoff has required that they innovate the planting technique, including using new biodegradable seedling encasements. Mikoko Pamoja provides an offset of 2,000 tonnes of CO2 annually, which can be purchased through the ACES Web site. In 2022, SOA will support the training of 10 "forest scholars" from the student communities around Mikoko Pamoja and Vanga Blue Forest (the other nearby site managed by ACES,) to become act

Professor of Teaching and Research in Environmental Biology at Edinburgh Napier University, and founding director of ACES, Mark Huxham is featured in this video highlighting the Mikoko Pamoja project.

SOA Tanzania Hub Leader Ailars David has trained 20 Hub members to conduct seagrass monitoring and restoration across 80,000 square meters in coastal Tanzania. Their work this past year resulted in 1,000 kg. c02 sequestered/stored and 11,000 square meters of seagrass restored. In addition to the carbon storage of seagrass beds, research indicates that a single acre of seagrass meadow can support upward of 40,000 fish and 50 million small invertebrates. In 2022 they are working to create a seagrass nursery and scale their restoration efforts. Ailars is the COO and Co-founder of the Arena Recycling Industry, a company in Dar es Salaam, Tanzania, that recycles marine litter into building materials ,and he serves as a Country Coordinator of the WIOECSN (West Indian Ocean Early Career Scientist Network) networks that connects youth in the marine science field.

Seagrass absorbs carbon about 35 times faster than trees and absorbs 10%  of the ocean's carbon annually (Source: Second World Ocean Assessment). Most of the carbon sequestered by seagrass meadows is stored in the sediment (Source: UN Environment Programme).

Planting mangroves and seagrass in Indonesia

SOA has supported Carbon Ethics for two years as they work to restore coastal blue carbon ecosystems by planting mangroves and seagrass, and studying different species across environment types to maximize survivability and carbon storage. They train local people to create sustainable goods from mangrove byproducts, like soap and dyes, to further incentivize their preservation. In 2020, they planted over 16,000 mangroves and 3,000 seagrass, an estimated 990 tonnes of C02e reduction.

Anthony Malle is the founder of Light for Nature Cameroon (LINAT) and received an SOA Microgrant to help coastal communities in Cameroon restore mangrove forests, and to grow coconut as an alternative source of fuel. 700 mangroves were planted, impacting 5,500 square meters, and 225 people (mostly women and youth) participated in 12 training sessions on mangrove cultivation and monitoring. Anthony is currently pursuing his post graduate studies in Environmental Geography and Natural Resource Management.

The Casa Mangle (“Mangrove”) Foundation in Cartagena, Colombia has established a mangrove nursery and trains locals on cultivation and monitoring; in 2021 they trained 20 community members and planted 400 mangroves, which are estimated to sequester 120 tonnes over their lifetime.

What is Blue Carbon?

Blue Carbon is usually defined as the organic carbon captured and stored by...