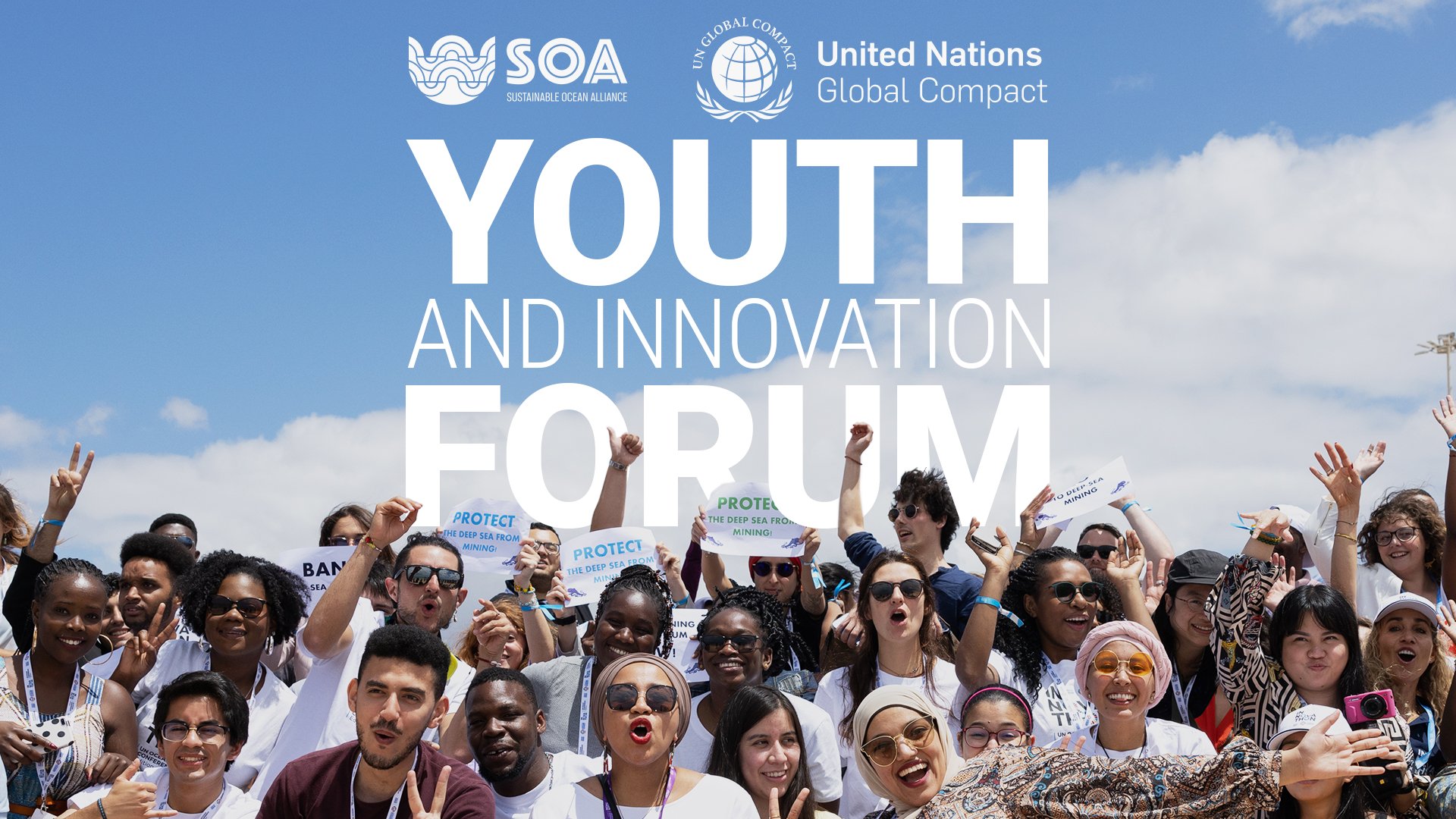 Dozens of new ocean solutions created, surprise appearances by Jason Momoa and the UN Secretary General, and so much more!

This past weekend, more than 130 youth from around the world gathered together on the beach of Cascais, Portugal, united by a single goal: to restore our ocean.

Most of them had never been to Portugal, or even met one another, before they were selected as delegates for the United Nations Ocean Conference Youth and Innovation Forum. But over the course of 24 intense hours, they worked together in small groups to create dozens of new solutions that will help to save our planet. 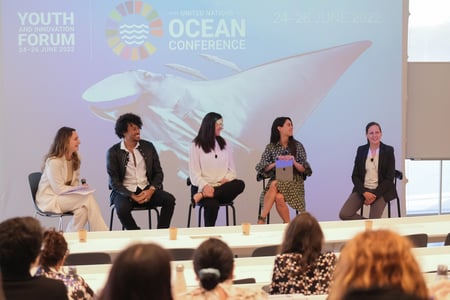 Nadia Ahmed, Kenya’s youngest Deputy Minister of Innovation & Youth Affairs and Chief Administrative Secretary, opened the forum with an energetic speech at the Nova School of Business and Economics. Ms. Ahmed’s remarks were followed by discussions on topics like global policy, how to mobilize action on SDG14, and how the youth participants could take action to create meaningful change. After the panels, everyone enjoyed a cocktail reception on the roof, which ended with an impromptu dance party!

On Saturday morning, our youth delegates broke up into small teams and learned about the five challenge themes: sustainable seafood, decarbonized shipping, ocean energy, ocean mapping and data, and waste management. The 24-hour Innovathon officially launched in the afternoon as each team started to create their unique ocean solutions, with expert mentors on hand to guide them. Throughout the day, the youth delegates were inspired by speeches from National Geographic Storytelling Explorer Tara Roberts, SOA Founder & CEO Daniela Fernandez, and more.

Watch Daniela's speech below: "It is a selfish and deadly choice to sit back and do nothing." 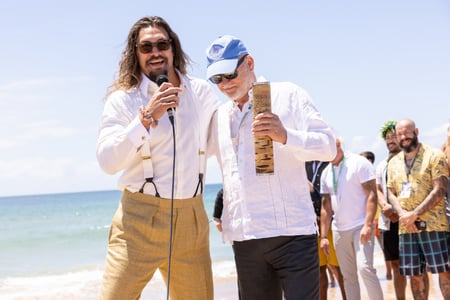 Sunday was full of surprises. The teams continued working on their solutions through the morning, until the 24-hour clock ran out. Then, everyone gathered together on the beach – where they were surprised by actor and activist Jason Momoa! He spoke about the important role the ocean plays in our daily lives and well-being, and shared his support for a deep-seabed mining moratorium, before receiving the Nature Baton from the UN Special Envoy for the Ocean, Peter Thomson. Momoa then handed the baton to two youth delegates, Maria Ermida of Portugal and Pamela Kiambi of Kenya, before they passed it to another surprise guest – UN Secretary-General António Guterres.

The Nature Baton symbolizes a global collaboration to promote the ocean’s well-being. According to the UN, the Nature Baton “is a metaphor for the journey ocean champions have taken this year from Brest to Nairobi for the UN Environment Assembly, to Palau for the Our Oceans Conference, and for World Environment Day in Stockholm, on the road to Lisbon.” Momoa was officially named the UN Environment Programme’s Advocate for Life Below Water at the UN Ocean Conference the following day.

After the passing of the baton, everyone returned to the tent, where they heard remarks from President Marcelo Rebelo de Sousa of Portugal, Assistant Secretary-General and CEO of United Nations Global Compact Sanda Ojiambo, Peter Thomson, and the Secretary-General. Then, it was time for the Innovathon pitches to begin.

Following the first round of pitches, the top five solutions took the event stage to pitch to the VIP judges. After deliberating, the judges returned to the group to share a stunning announcement. An anonymous donor had matched SOA’s pledge to award a $15,000 microgrant to the winning team: So not one, but TWO teams received funding to help bring their solution to life!

Dyna Kagendo Jamlick of Kenya, Rafeah Mustafa Kamal of Malaysia, Rahma Kivugo of Kenya, and Saif-Eddine Laalej of Morocco were part of winning Team Waste Vengers. Their solution will address the tonnage of plastic waste in coastal communities in Malaysia by transforming plastic into eco-friendly construction beams. This will incentivize communities to collect waste and protect mangroves from being turned into building materials, all while creating a new source of income and employment.

Andrea Paz Lacavex of Mexico, Bodhi Patil of Canada, Donal Griffin of Ireland, Juliette Audrey Biquet of Portugal, and Sarita Fernandes of India were part of the other winning group, Team INVASEA, which is innovating with invasive species. INVASEA is a novel solution that tackles the ecological and economic costs of invasive species. It will be a platform where local communities connect with scientists and businesses, using invasive species to create marketable products such as seaweed-based bioplastics and fertilizers. This drives the recovery of coastal ecosystems by restoring native species. 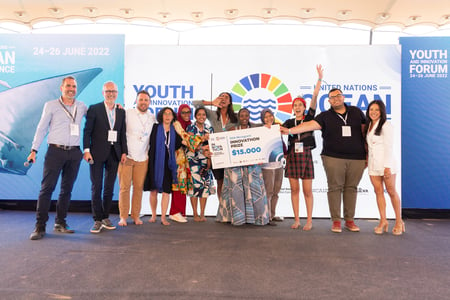 After the winning teams were announced, SOA’s founder & CEO Daniela Fernandez gave one last speech, where she shared her experience immigrating to the United States when she was 7 years old, and reminded the crowd about what we all stand to lose if we don’t take immediate action.

She also announced SOA’s commitment to raise $100 million to restore the health of our ocean — and revealed that we just raised $15 million in our last round of fundraising!

As the sun set on the beautiful Carcavelos Beach, the event began to wind down. It was time for a well-deserved celebration: delegates, speakers, and mentors all danced the night away. It was a magical and inspiring weekend, and we are so grateful to have experienced it with this incredible group.

Thank you to the UN Global Compact for trusting SOA and believing in our ability to shine as a co-host of this global event. And most importantly – THANK YOU to all of the delegates, speakers, and mentors for your passion, creativity, and for giving us hope. We know the next great ocean solutions were created on that beach this past weekend, and we are here to support you every step of the way. 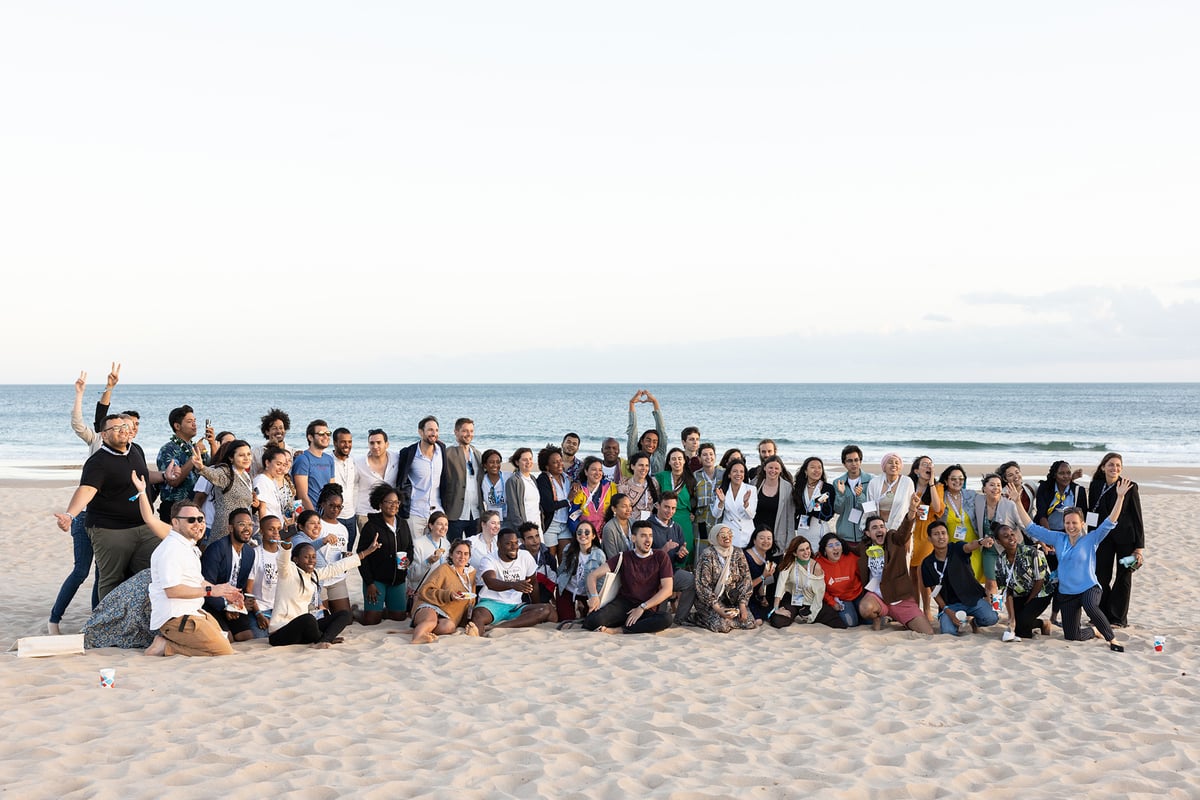 Empowering the Next Generation of Ocean Leaders

This year, SOA has made incredible strides toward our mission to heal, restore, and sustain our...

Deep-seabed mining, the blue economy, and marine protection were among the top policy discussions...